I have wanted a Home theater PC for awhile to play movies, music, Hulu, and more through my TV. I thought briefly about buying a prebuilt device (like a Roku), but I decided to hack one together myself. My main motivation was flexibility and the fact that I like to tinker. Furthermore, I wanted a device with a hard drive that I could load up with files and play directly to a TV.

I asked around for recommendations, and several of my coworkers recommended Zotac. After looking through their options, I decided on a Zotac ZBOX ID41 (here it is on Amazon).

I decided to run Ubuntu 11.10 Oneiric Ocelot for the operating system. The Zotac ZBOX has no CD drive, so I downloaded the Ubuntu ISO from the website, and I used UNetbootin to make a bootable USB drive.

I plugged an HDMI cable from the Zotac into my TV, and I plugged a wired USB keyboard and mouse in the Zotac. I inserted the USB drive and booted it up. It automatically booted from the drive, and I selected Install.

Once the installation was finished, I had to go to Settings -> Sound and choose the HDMI output. Then, sound correctly played through my TV.

There is a lot of software for home theater PCs. I chose XBMC since it seems very polished and has a lot of plugins for different video sources (such as Youtube). It’s also optimized for a remote instead of requiring a full keyboard.

I had to add an extra apt repository in order to install the latest version of XMBC (11.0 beta1). Here are the commands I ran:

Then, I launched XBMC from Ubuntu. I was greeted with a screen that looked like: 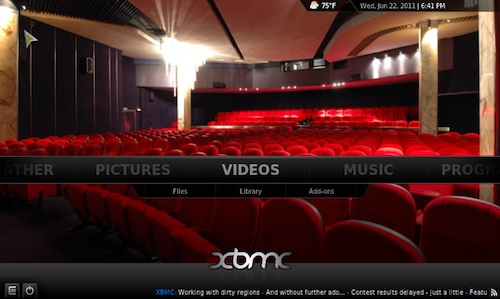 I went to Settings and changed my region to where I live. I also told XBMC to update my library on start. Then, I went to Weather and entered my zip code to get local weather. Next I went to Videos -> Add ons and installed a bunch of video add ons (such as Youtube, HGTV, etc).

At this point, I had to manually run XBMC whenever I restarted the computer. There are many strategies to boot directly into XBMC. I decided to just add XBMC as a Startup Item in Ubuntu. I also allowed Ubuntu to boot without a password. So Ubuntu boots up and then runs XBMC when it’s finished. If I need to go back to Ubuntu, I can just exit from XBMC.

XMBC uses filenames to figure out which movie or TV show a file represents. For example, with default settings, episodes of a TV show need to be named in one of the following formats:

These files should be in a folder with the name of the show. The full set of instructions can be found on the XBMC website at TV Shows (Video Library).

I created a Movies directory and a TV Shows directory under /home/paul/Videos and uploaded my media. Then, I added these directories to XMBC and set the content type to Movies and TV Shows respectively (see Media Sources).

Finally, I quit XBMC and restarted it. It scanned my directories and added the movies and TV shows to the library.

Unfortunately, there are no officially supported Hulu plugins for XBMC. I managed to get an unoffical plugin working with some extra effort using Bluecop’s beta video plugin repository.

I downloaded the zip file from the site above and saved it to the Zotac. Then, in XBMC, I went to Settings -> Add ons and chose to install add ons from a zip file. At this point, the Hulu plugin appeared in the list of available plugins to install. I installed the plugin, but it still didn’t work.

By looking in the XBMC log (~/.xbmc/temp/xbmc.log), I discovered that Hulu requires a newer version of rtmpdump than Ubuntu ships with.

I built the latest rtmpdump from source with the following commands:

The last step copies the new librtmp on top of the existing one, which isn’t great. Unfortunately, XBMC runs with a specified library path, so I couldn’t find an easy way to add a different directory to the path.

Now, Hulu works. Unfortunately, I have to browse for videos to play. If I search for a video, and then play it, I get the following error in the xbmc.log:

Browsing works just fine, though, so I only browse for videos.

I’m still using a wired USB keyboard and mouse, but I’m planning to get a home theater friendly wireless keyboard/mouse combo. Something along the lines of a Rii Mini Wireless Keyboard.

There are also hundreds of XBMC plugins I haven’t checked out yet, as well as other ways to customize XBMC.

While we’ve been pushing more of our production services towards Continuous Deployment for faster and safer releases, we’ve discovered we can build the ideas...